don't spend your time pulling up my "Yes, to Prop 2" yard sign or mangling my "Obama/Biden" sign. Use you time constructively and go vote for the candidate of your choice...I did.

Email ThisBlogThis!Share to TwitterShare to FacebookShare to Pinterest
Labels: Obama

I need to talk about my son, Creed. He is an absolutely delightful human being. He has dimples, he is ticklish, and he loves to run - everywhere. He is easily distracted but when he is focused, he stays with it. He is a drummer. He carefully selects his sticks and drums on a variety of objects. He also seems to be enthralled by any backstage activity at a show. He is slowly learning French, automatically responding with "Merci" and asking with "Si pay..." - his version of "s'il te plait". Creed loves his dad and his twin sister and hopefully his momma.

Creed is constantly surprising us with his memory, his agility and his enthusiasm. His latest trick is to tell me when he is about to leave the room: "Mom, I'll be back, okay? Okay mom? Okay? I'll be right back." Then 2 seconds later, he'll stick his little head around the corner and say, "I'm coming back!"

At our parent-teacher conference at Ecole, he was described as 'social' but he doesn't quite know what to do with it yet! "He seeks the companionship of other kids, especially boys." Although all the girls seem to love him because he's so cute. Lots of people think he's a girl because of his long hair - but I see him as all boy...yet he does have a wonderfully compassionate side to him...he's independent but fiercely protective of Zelda. "Is she okay? Is she happy? Did she poop?"

I have been having a rough few days for a number of reasons, Evan is away working in West Texas & 'Caleefornah', the weather is gray, I haven't been sleeping, the economy is cutting my business down to almost nothing...but at 7am when I go to get Creed out of his bed and see his sleepy little smile, it makes everything all better. 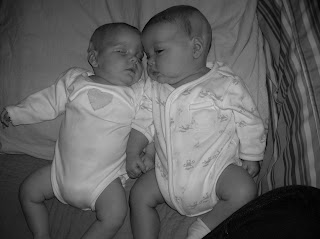 Creed now - on his 3rd birthday: 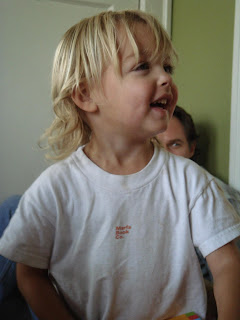 Email ThisBlogThis!Share to TwitterShare to FacebookShare to Pinterest
Labels: Creed

So every year on October 15th, thousands of blind people across the country celebrate National White Cane Day. Here in Austin, there is a march from the lawn of the State Capitol down to the steps of City Hall. Last year over 300 people participated. The community effort and celebration serves to educate and foster awareness about the blind - whether they walk with a white cane or have a guide dog. There is a gathering in Republic Square Park with music, food, booths with information about Braille, games and resources.
I really wanted Zelda to participate this year and we will in the future but she's just not there yet with her cane. She is coming along nicely however!

So after I dropped the kids at Ecole, I drove along to accompany the White Cane walkers. I was feeling particularly empowered and proud and energized and then like a wave, it came over me. I sobbed. I cried for my daughter. I cried for the loss of of her sight. I pulled into my driveway and just sat - defeated. I guess I'm still not finished mourning and don't know if I ever will be.

Zelda is a superstar, a pistol, a smart, silly little girl who now says "Merci" when you hand her a cookie. In our Ecole conference, her teacher described her as "extremely popular". She explained that the classroom is a better place because of Zelda. The students are kinder, more thoughtful, more attentive. Do I ever want her to feel objectified? Of course not. Do I want her to help educate people and open their minds to the unknown? Hopefully someday. But most of all I just want her to be the most Zelda-like girl that she can ever possibly be...and I want her to be happy and have friends.
Posted by toxomaman at 10:30 AM 3 comments:

With only 3 weeks left before the election, we are giving Mom a break from blogging and thought that we would send you a little note. Mom has been very frustrated with "that guy" - you know, the one you're running with! - as well as you and she has held her tongue on more than one occasion. BUT, with that aside, we have several bones to pick with you. Now, you may not know that we are only 3 yr old twins and Zelda is blind, but we still have our opinions at this early age in life - even if we don't say much yet:) So, here we go...

1. As we are learning to speak, we would appreciate the proper example set of grammatically correct English. Mom says that words that end in 'ing' should have those letters pronounced, as opposed to dropping the 'g' and endin' in "'in"...Also, we have a problem with putting an 'a' at the end of words, such as 'gotcha' and 'getcha' - and by the way, are those really words? We were really hoping that after 8 years of abuse of the English language in the White House (albeit we weren't alive!), we could regain some eloquence appropriate to the leaders of our country.

2. You seem to relish trotting out your kids when it's convenient to your campaign - i.e. the soldier and the Special Needs baby, but seem to be offended by the publicity given to your unwed daughter who had sex before the legal age of consent. Mom says that kids need to be taught about sex because everyone wants to do it and that education is the key. Also, we are pretty certain that Roe vs. Wade is a good thing. It's not at all about killing or not wanting babies and has everything to do with a woman's right to choose. We could have a 24 yr old brother or sister right now - and Mom says, "Thank goodness we don't!" Also, during your speech you said, "To all of you Special Needs Moms out there, you'll have a friend in the White House". Yes we will and his name is Obama...and we can tell you that not only the Moms need help, the Dads do too, and the siblings and the Health Care system and Medicaid, etc. and especially the Special Needs people themselves, so stop using us as a campaign stunt and tell us what you're going to do...How about funding for continued stem cell research?

3. We are sorry that it took you until last year to get a passport to leave this country for the first time in your life, we are already learning a foreign language and should have our very own passports soon. I don't think Canada counts and being able to see Russia from your balcony doesn't count either. It has much more to do with desire than resources...you obviously had the time to train for and fund your beauty pageants, why didn't you have a bake sale to buy a plane ticket to Europe and go backpacking?

4. And last but not least, we have met lots of city officials, the mayor, rock n'roll singers, TV news anchors, millionaires, and college professors - and you know what? Most are really, really smart well-educated people. And you know what else? None of them are qualified to run this country, so please stop thinking that you are. We really do support your desire to work outside of the home - that's not an issue for us as our mom owns her own business, we have had wonderful nannies and now go to preschool - so, it's not about being a stay-at-home mom. It's about experience and finesse.

We could go on and on and really hit upon the issues but the political journalists are far savier than we are on the important stuff. But, what we have mentioned is important to us and BTW, it's much more fun to say OBAMA than it is to say the name of that other guy:)

P.S. And please stop winking at the cameras - if you want to bring sexism into the debate, a male politician would really be mocked if he ever tried that! Although it's pretty cute on either girls or boys when our friends do it in preschool...
Posted by toxomaman at 10:07 AM 10 comments: