ECOLE UPDATE: People keep asking how they're doing...well, okay I guess! Creed is a champion. He's a good little Montessori "worker". Yesterday when I picked them up at 3pm, I asked him if he had fun at school...he said "No Mom, ECOLE!" So, I guess he's catching on...
As for the Z-bomb - it fluctuates. She seems to be emerging from the end of summer, post-surgery tough times. She's eating well and starting to sleep better (aside from last night) but she's still a major pissant. Yesterday's Ecole-report stated that Zelda "chose not to participate in the lesson". Yikes - apparently she threw herself on the ground and did a bit of crying and such. My poor little puce. The teachers say it usually takes new kids 6-8 weeks to adapt to their structure so we're only at week 3. I let you know more after our end of the month parent/teacher conferences. Otherwise, she's doing well but is extremely stubborn, strong-willed, and crafty. Scott & Andrea, her TVI's, see her there 2x/week for the pre-Braille lessons and such. Gene, her O&M teacher - that's Orientation and Mobility - sees her at outdoor time once a week. Soon she'll be getting her first long white cane! Woo-hoo!

TWINTUITION: I have been talking a lot more to Creed about how Zelda sees. He likes to hand her things and tell her what to do, etc. and I've managed to convince him to actually place the item in her hand instead of just thrusting it at her. The other day, he found an interesting old piece of raffia and ran up to her saying "See, Zelda, see!" while dangling it in front of her face. So now we're talking with him about Zelda seeing with her hands as opposed to looking with her eyes. When we travel by car, we always count cows and such, pointing out the sights to both kids - describing in detail for Zelda. I use the word "see" with her as much as I do with Creed - it's just different, I guess.

OBSERVATIONS FROM OTHER KIDS:
One day this summer, Zelda broke her glasses and she went to camp without them. When I picked her up that afternoon, a little girl informed me that "Today Zelda didn't have her glasses so she saw with her hands!"

And the other day upon picking Z up from Ecole, her classmate informed me that she thought it was cool that Zelda held her foot on the slide instead of holding her hand ???
Posted by toxomaman at 10:52 AM No comments:

This past Saturday with no plans on the horizon, I opened our local weekly Chronicle and chose a visit to the Dinosaur Park as a morning outing. Well, it's my new favorite kitsch place to take kids between the ages of 2 and 8 - a perfect place for an out-of-the-way birthday party or field trip. It's about 20 miles outside of town, down a dirt road past an RV park. Basically it boils down to a "nature trail" sprinkled with varying sizes of fiberglass dinosaur models and perhaps a small sign/description. There's a play scape at the end of the trail, a pseudo-dinosaur dig AKA sandbox and a super-duper gift shop that has every dinosaur inspired souvenir imaginable. Aside from Creed's sheer glee in Dinosaur-day, Zelda had an absolute blast following the trail. Z-bomb is very much in a phase of wanting to walk by herself - absolutely no holding hands! She perfectly navigated the dirt trail with all of its twists and turns, roots and rocks. Whenever she strayed into the brush, she quickly re-negotiated her path and continued on, giggling and at times running with delight. 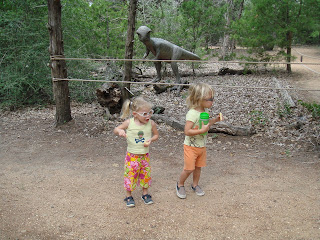 On Sunday, Evan and I had decided on a family "Road Trip-day". We set out west with San Angelo as our destination...the twins were amazing. We sang, chatted, and stopped at antique stores, junk depots, and flea markets along the way - not to forget my personal favorite place to shop: Venison World in Eden, Texas. Whoopee! What an adventure! We left at 9am and were home by 9pm - with 500 miles under our belts! Creed and Zelda have now been officially baptized into our Junk Run Religion... 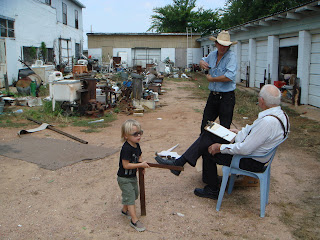 Oh, and one more thing, Ecole is going really well - more on that later, I promise.
Posted by toxomaman at 10:37 AM No comments: