I am really proud to be a part of this national campaign sponsored by Nike and Live Strong - the Lance Armstrong Foundation. It's a powerful TV commercial and it premiered last night on all major networks. See it tonight during Conan & Letterman...and yes, that's me: the bald one pulling herself out of bed... 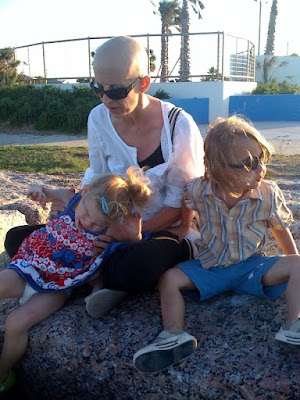 Somehow our family photos always look like this...let's just say we're not exactly ready for Sear's Portrait Studios. Although, the idea of a perfectly smiling family with blank expressions dressed in coordinating outfits against a surreal backdrop kind of intrigues me.

The beach turned out to be fun. It's not a bad ride to Port Aransas, just about 4 hours and there's not much traffic on back roads. The twins were giddy with excitement but of course grew impatient after hours in the car. Then we arrived at the ferry. We had tried to prepare them, warn them of the noise, the movement & such. But they both freaked out - "we don't like this", they cried. "Make it stop!" Every step of the way was a test in our ability to describe each detail to Zelda - from the cows in fields to the causeway, from the gulf water to the gates opening as the ferry landed. I kept wondering what she was thinking - how does my little girl process all of this information? So many news sounds, new smells, new feelings of ocean wind on her cheeks.

The first day on the beach saddened me. Creed was running, playing, trying to catch seagulls. Zelda was miserable. She wouldn't even put her feet on the sand. The waves were roaring, children were screeching in the surf and Z wanted no part of it. I imagined closing my eyes and going through an amusement park fun house with all of the strange and startling noises. Zelda liked the beach house and we slept soundly after an evening at the marina. She climbed the steps to the tower at least a dozen times.

And then the next day, we started slowly. She sat on my lap on the blanket on the beach. Then we carefully took a walk through the sand. I described every detail as we walked to the water's edge. We stopped at a tidal pool and I explained that it was a puddle and I jumped with her until she felt comfortable enough to enjoy it herself. And then we ventured across the packed, wet sand into the surf. She giggled and was surprised as the water washed against her skinny little legs. Creed & Evan were a long way off down the beach in and out of the water and taking time to build a sand castle. Zelda took my hand and we walked along the water. I told her about the tides and we imitated the sound of the gulls. She declared that she liked the beach and splashed and played in the water.

I wish that I could figure out how to post the video that I made of our time at the beach...but for now, you'll have to settle for photos. 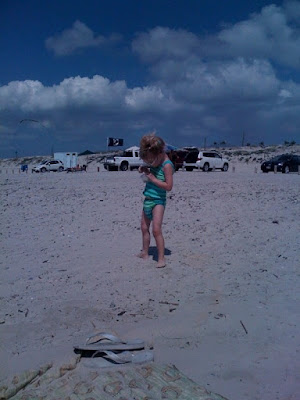 Only the good die young...

...I know that it's not true, but sometimes, especially in this past week, it feels this way. I met a woman once - during the Art Bra Fashion Show just 2 months ago - she was a bra model that evening along with many other breast cancer "survivors". She was petite, pretty, friendly and wore a silky brunette wig. She became my friend on Facebook and that's the last I ever saw of her. She died last week of breast cancer that had spread to her brain. She was 43 and a single mom.

And then last night, we were gathering to raise funds for the care of the legendary Austin jazz singer, Tina Marsh. She was a force to be reckoned with, a true artist devoted to her craft for over 30 years. She was fighting through her second or third round of breast cancer. We arrived at the concert and found out that she had died a half an hour before.

I've talked to Evan about these women. It scares me, angers me and saddens me. He says that unfortunately there are always a percentage of those afflicted that will not survive. And then he said something like this, "It's sad, it's unfair and unfortunate, but for every one that dies, they fill the percentage of casualties and that means that you'll be among the survivors who live."

I don't want to be just a survivor. I want to be a fighter. 'Survivor' somehow connotes passivity, inactivity...hope. For me, it's like the French school of existentialism who didn't believe in the word "hope". The word or act of "hoping" meant that you were holding back and waiting and not actively involved in defining your existence. I want to be involved, I want to define who I am, I want to fight. It scares the shit out of me, this cancer thing, this chance of recurrence. But, I vow to be a fighter...
Posted by toxomaman at 2:09 PM 6 comments:

...so, I did. I'm in a national TV commercial. About a month ago, my friend Erin, who happens to own a very successful casting agency here in town, sent me a message about an audition for people with cancer in treatment or cancer survivors. Let's just put it this way, the casting call was for a commercial for a very well-known sportswear/shoe company and their cancer fighting ally: LiveStong with Lance Armstrong. So, I went and talked to the camera about my story and then heard nothing. In the meantime, the kids were finishing school and I was dying to take the 4 day weekend at the beach. We were to leave last Thursday...

Of course, late Wed night, I got the call. It had taken the director until that evening to decide on the cast. They wanted me to come in and be an extra the next day. "Pshaw," I said. "Why cancel my plans for the beach if I'm not a star?!!" Well, Evan and my friends said, "It's Nike! - and it's for cancer awareness - just show up for the damn thing and leave for the beach a day late." So, I did and they didn't use me on Thursday afternoon. BUT, they did pay me as an extra and sent the other tall, thin bald woman packing and asked me to return the next day at 7am as a principal. (NB: our time at the beach is getting shorter and shorter).

As it turns out, the 'extra' thing was just a ruse to get another look in person at me and my competition. The director wanted someone bald, thin and sickly enough - enter me, woo-hoo! - to lie in a hospital bed and....sshh! the rest is a secret. I now have a SAG card, can say I worked with this wonderfully famous director of TV commercials and will be seen all over America towards the end of this month and into early July before Lance launches into his next Tour de France. And we left for the beach by 3pm last Friday afternoon.

In the meantime, today I was interviewed by a national magazine (as will the rest of my family) for a story to be published during Breast Cancer Awareness Month this fall. More to come...
Posted by toxomaman at 9:35 AM 3 comments: