Watching a movie: one blind, one can see...

...so, we've taken to watching movies in our little house. I, for one, love crime TV, but Evan is always freaking out that Creed will see violence, blood and death and I guess he's right. So, on weekends, in the mornings, we watch cartoons on PBS and then usually a movie on a dreary cold day like today.

Creed is like his Dad: if there is absolutely anything moving on the screen, he is fixated. Frozen. Un-interruptible. (Is that a word?) "Creed, Creed, Creed!" I can shout. "Evan, Evan, Evan!"...it's the same non-responsiveness.

Zelda watches TV with her ears. She walks from her room, leaves her Lego's or books or beads - or brings them along with her - then stands right next to the screen and listens. It all depends on if she hears something sufficiently interesting or recognizable. She can sing with the Biscuit Brothers or recognize Elmo's voice and then will repeat or count along. She'll echo the dialogue and ask questions. "Mom, who's that?"

So, today we decided to watch the animated "Beauty & the Beast" (not to be confused with Jean Cocteau's "La Belle et la Bete", one of my favorite films). Both twins were on the "big bed", with Creed hunkered down to pay attention and Zelda sitting nearby with her "tickets". She likes to play with a stack of unopened mail - sorting it, holding it, counting it, etc. The movie begins and instantly Creed gives a dissertation on how Gaston is the good guy and the Beast is bad. So bad, that he wants to close his eyes and not see him. It's scary. Meanwhile, Zelda is happily singing and listening to the voices and songs. When they enter the castle, she shouts "They're in the bathroom" - because she recalls the echo of when we go into a public restroom. When the wolves are barking or the Beast is growling, she'll say "Mom, it's the dogs!" I try and describe the difference to her but the action moves fast and so does Zelda...she is bouncing, smiling, rolling on the bed, but always listening. I try and relay the plot, the characters and the action but to no avail. She's just not there yet...in terms of patience and wanting to understand. Nothing is scary to her and she can leave the action at any moment. In that way, Zelda is like me. I rarely get frightened and actually like horror films and I can also multi-task, knitting, emptying the dishwasher, sewing a dress, while a movie is on.

But the three of us do make it through the film: "tickets" and cookies all over the bed. Creed leaning on his elbows, riveted to the screen. He appreciates when the Beast turns from a "bad guy" to a "good guy". Zelda likes that Belle is pretty and that there were some songs. But alas, at the end, she still says, "Mom, can I NOW go and listen to Manu Chao?..." 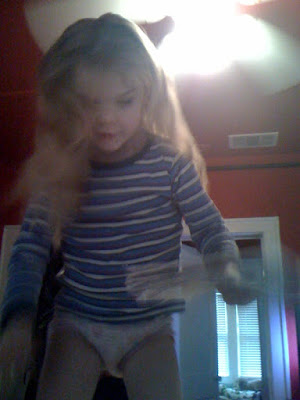 Email ThisBlogThis!Share to TwitterShare to FacebookShare to Pinterest
Labels: Beauty and the Beast, blindness, movie time

photo by Todd V. Wolfson
Posted by toxomaman at 9:31 AM No comments: