I am a member of a list serve for Parents of Blind Kids, the other day a mother posted this concern:

"My 6 year old daughter has recently started talking a lot about being
blind and about her "acrylic" eyes, as she refers to her prosthetics.
The other night, she said to me "Mommy, can you get me something so I can see with my eyes instead of with my hands?""

I know that it's a bit early for Zelda to ask a question like this but it's definately something to start thinking about...that's it for today.
Posted by toxomaman at 11:48 AM No comments: 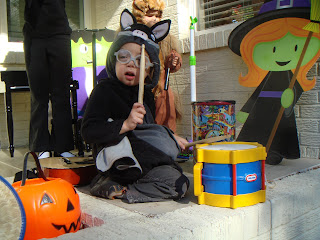 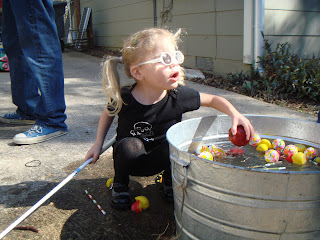 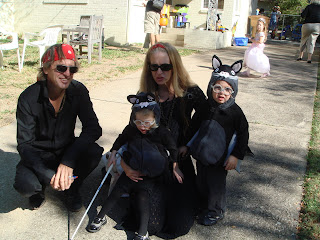 "I came looking for Johnny Depp - err, I mean Sweeney Todd and all I got was a dead Mariachi!" 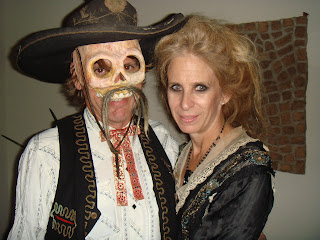 Posted by toxomaman at 12:27 PM No comments:

Email ThisBlogThis!Share to TwitterShare to FacebookShare to Pinterest
Labels: Halloween

Blind as a Bat AKA Halloween '08 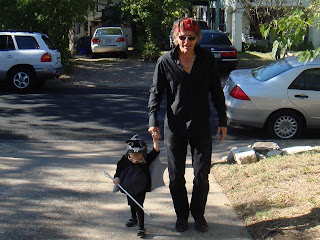 Forgive my late blogging of the event of the season...Halloween, that is. So much has happened, not the least of which is Zelda learning to use her long white cane! Halloween was an action-packed, fun-filled week starting with the annual practice Trick or Treating at the Clarksville home of our friend, Margaret. The twins enjoy it more and more each year - apple bobbing, musical instruments, an A capella group, lots of kids and of course the T-or-T activity. We were the Rock n' Roll Vampire Family with Creed & Zelda as our little bats. Another evening took us out to Kat & Don's for bales of hay, tractor riding and pumpkin carving and then off to a Biscuit Brothers concert at Central Market. The following night was Halloween and the twins went out to the 'burbs for the T-or-T marathon evening with the cousins while Mom & Dad had an evening at the Black Ball. 18 houses later...Creed & Zelda had a sound sleep and we picked them up the next day.

So, at the end of October, Zelda received her very first long white cane courtesy of the NFB and is adapting quite nicely. There is a bit of controversy over the age of when a young child should begin to use a cane. The NFB basically promotes the sooner the better and I am in their camp. It promotes independence and confidence from an early age. She is so very petite and of course, elicits a lot of stares, comments and questions as she walks down the street, through the grocery store, or on the playground of Ecole. I like to tell her to "Tap gently" as she maneuvers her cane along the sidewalk. She was already a fearless and expert traveler and her instant attraction to her cane has only added to her desire to be on the go! People, as always, are crazy and inquisitive, but also quite ignorant: "Is that her Halloween costume?" "Is she practicing to be blind?" "Hey, watch out for the little girl with the stick!" Some just stare with the looks of sympathy and then hug their own children as if to protect them from a contagious illness. Others go out of their way to avoid getting in her way. Each day, I try to take the time to explain these questions and comments to her. Creed is also getting pretty good at fielding the comments, he responds "That's Zelda's cane!" He seems proud of her and he wants one, too.

Anyway, it was actually a coincidence that I chose bat costumes for the twins for Halloween. It got me thinking about comments, songs and such...the expression "Blind as a bat" is actually quite fitting because Z really does seem to exude an innate sense of radar or echolocation. But how will Zelda feel about the song "Three blind mice"? And then there was a joke about a blind race car driver a few weeks ago on Saturday Night Live. Evan & I looked at each other and asked, "Should we be offended?" ...Will Zelda develop a keen sense of humour and accept these aspects of our society with courage and grace? We can only hope ...stay tuned.
Posted by toxomaman at 9:30 AM 4 comments:

We celebrated an amazingly historic event last night. We celebrated the overwhelming election of Obama as the next President of our country and we did it at the former home of Barbara Jordan - the first black woman to ever be elected to the US House of Representatives. The twins fell asleep, but they were there and we'll tell them about it when they're old enough to understand. We drank champagne and watched as people around the world danced in the streets.

It's a future filled with hope for our country, filled with opportunities for our children, filled with the re-branding of America...
Posted by toxomaman at 10:05 AM 2 comments: